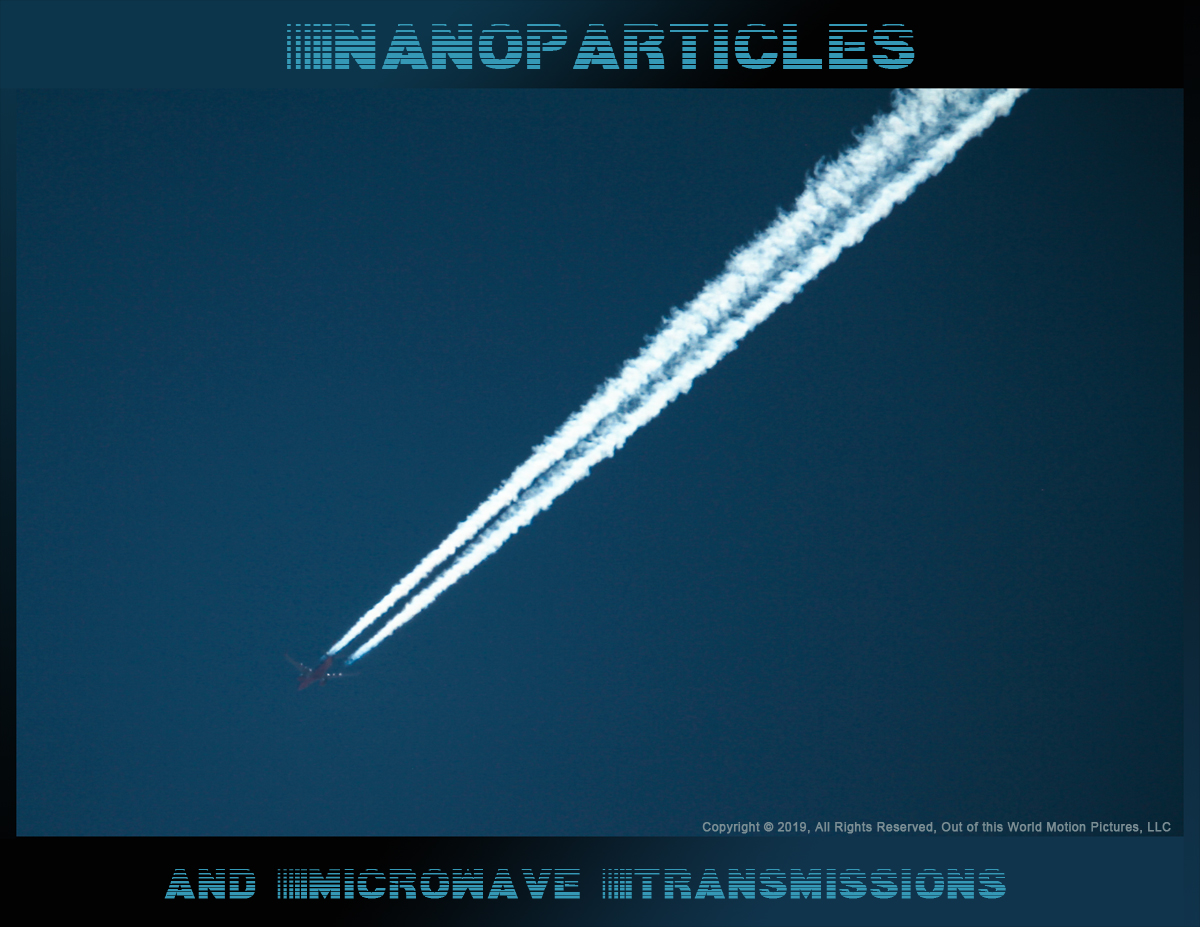 In February 2019, a comprehensive review by the Forum of International Respiratory Societies’ Environmental Committee, stated nanoparticles damage almost every cell in the body when these nanoparticles are inhaled.(1)

The study was published in June 2019, by the journal of Environmental Research.(2) It analyzed the heart tissue from residents of Mexico City. They found in the heart tissue from even the youngest subject, a three-year-old, damaged cells in the organ’s containing up to 22 billion nanoparticles per gram of tissue. These Nano-Particles cause serious damage to humans and being linked to neurodegenerative diseases such as Alzheimer’s.

An important distinction between air pollutant measured in the test and Nanoparticles dispersed in Geoengineering applications is that the ladder are not picked up by air quality testing instruments. They fail to detect these type of Nanoparticles, as they are too small. Air quality testing detects Inhalable Coarse Particles at PM 10 (dust, pollen, mold etc.) or PM 2.5 particle density (combustion particle, organic compounds, metals etc.).  Geoengineering Nanoparticles are far smaller. Yet, according to Analytical Research Labs and numerous articles published by Elsevier, 80 percent of people tested have excessively high aluminum and barium levels.

As stated in the documentary film “No One Gets Out Alive!” the human race has been a very poor steward of this planet – and please do not make that error to fall into the denial trap, that the excessive release of Carbon and Methane is harmless, because you feel a natural tendency to go against the grain of liberal madness and their Green New Deal proposal. In my opinion, it would be a grave mistake to ignore the decades long poisoning of our air through industrialization. If you think that 1.2 billion cars in use, emitting massive amounts of Hydrocarbons, Nitrogen Oxides, Carbon Monoxide and Carbon Dioxide have no effect on the environment, we aren’t thinking alike. This being said, the ongoing climate engineering is by far the greatest contributor to the climate debacle. Yet, no one is talking about it on Capitol Hill. Including the “Green New Deal” advocates.

Putting all this political showboating and partisanship aside, we must recognize that the planet is in dire shape and our eco system is failing. Yet, the United Nations, who proposes their solution in their Agenda 21 and their underlying policies may be the worst answer ever to be presented “solving” this problem, as the Agenda 21’s “Sustainable Development Goals” are strictly of political nature and will only benefit the ruling class, while in the final equation, the rest of us gets exterminated.

If asked how big the problem really is, we could use as an alarming example the world’s largest coral reef, Australia’s Great Barrier Reef. Branded as one of the seven natural wonders, it is composed of 2,900 individual reefs – and it is dying. In fact, our planet is dying. And there are no reasonable solutions presented. The only answer the power structure has, is to divert the attention of the masses away from the rapidly accelerating biosphere destabilization, by creating massive diversions.

Going about their usual MO, the military industrial complex and the war hawks, are about to start new international conflicts, to push the attention of the general public away from the emerging catastrophe. In the hopes you will soon shift your attention to the heightening conflicts in Iran, Syria and Venezuela. Add a few false flags into the mix – and we’re off the subject in no time.

Now you may not like to hear this part; but only dealing with the facts allows us to implement change.

While I am a supporter of President Trump and have mentioned his numerous accomplishments, working against the United Nations in the piece UN Agenda 21 vs. Freedom, I am also critical of the shortcomings of this administration.  For example; President Trump is supporting the easement on laws, implementing Genetically Modified Organisms. President Trump signed the order in June of 2019, during a stop at an ethanol plant in politically important Iowa. The order is intended to speed approval of new agricultural biotechnology, reduce developers costs and encourage more investment in GMO crops. Ladies and Gentlemen, this is nothing short of a tragedy, because no amount of financial gains justify the poisoning of humanity. (8)

President Trump is also heavily promoting the massively dangerous and untested 5G technology, while completely ignoring climate engineering. Keep in mind, these systems are capable of mass depopulation and the extermination of human kind. As long as we cannot change President Trump’s stand on these vital issues and open his eyes to what is unfolding, he is in the grand scheme of things supporting the New World Order. Just as his predecessors, George H. W. Bush, Bill Clinton, George W. Bush and Barack Obama did. All his predecessors were New World Order puppets. Also, keep in mind, people in the Trump Administration are war criminals and neocons; namely John Bolton, the National Security Advisor and the Secretary of State, Mike Pompeo upfront. Bolton was responsible for carrying out wars of aggression in the Middle East and was one of the architects of the Iraq war. While Pompeo participated at the 2019 Bilderberg meeting in Montreux. Continuing on the current path of this administration, I don’t foresee a happy ending.

At present, no one seems to care for what really matters. Because we can’t breathe economic growth. On the grand scheme of things, the open border crisis, even though a detrimental tool of the United Nations Agenda 21, is still minute in comparison to the Nanoparticles seeping into our organs caused by Geoengineering. These Nanoparticles have infiltrated our organs and brain matter. Our poisoned atmosphere is at the point where breathing has become hazardous.

In the own words of the most renowned Geoengineer, David Keith, who is working on Geoengineering applications since 1992, it will take the disbursement of over 20 million tons of Nanoparticles in the Atmosphere, to slow global warming. The documentary film “No One Gets Out Alive!” depicts in detail how, in clandestine operations, the military industrial complex and the civil airline industry are complicit in carrying out this insanity. Jet fuel additives, such as Octel Starreon Stadis 450, injecting solvents of barium salts and sulfur into the atmosphere and are continuously disbursed by the 40,000 planes which are in the skies. While the military aircraft tankers, deliberately releasing toxic mixtures of Aluminum, Barium, Strontium, Cadmium and other carcinogens on a massive scale.

The real-live example of the results are felt by millions of people; just recently, raised levels of Cadmium was found in my girlfriend’s blood. Cadmium (Cd) is a heavy metal and known human carcinogen. As she is living on a strictly vegan, organic, non-GMO diet, is filtering her drinking water and is not exposed to heavy metals anywhere else, such as working in the metal industry, I suspect the large quantity of Cadmium found in her blood, got into her system through Nanoparticles from Geoengineering. These heavy metals and chemicals have wreaked havoc on her health. Cadmium has a half-life of 50 years, meaning she will have to live the rest of her life with an ever growing amount of Cadmium in her bloodstream. Cadmium can cause severe neurodegeneration(7) and cancer. She is barely over 50 years old and suffers from chronic degenerative illnesses. Almost daily she has to deal with severe pain in her joints. Her tendons are destabilized and she has to endure dislocations that suddenly, without warning and randomly occur. Including in her neck, back, shoulders, knees and fingers. Basically all over her body. And no doctor seems to be able to help her. Additionally, she was exposed to Glyphosate and GMO’s up until about a decade ago, when I made her aware of the dangers. Even though she has undergone drastic lifestyle changes it seems as if the damage has been done.

Suddenly thousands of bees were dying after the July 2019 Earthquake in California, topping the Richter Magnitude Scale at a massive 7.1.(9)

The media reports that scientists from the US Geological Survey (USGS) – a US Government Agency, still have no answers for this phenomenon. What have the main stream media and scientists of the USGS in common? They are paid their 30 pieces of silver to sell out humanity from the same master.

In 2011 MIT had recorded an anomaly over Fukushima. Infrared emissions above the epicenter increased dramatically in the days before the devastating earthquake in Japan.(4|5)

Was this a coincidence? We think not. I know, man-made earthquake caused by HAARP sound like a conspiracy theory – just like the JFK assassination and 9/11 – right? If you watched the documentary film “No One Gets Out Alive!” you are familiar with HAARP, controlled by the military industrial complex, and their capabilities, as described in greater detail in the documentary film.

Climate engineering is directly responsible for the extreme weather whiplash all around the world. And HAARP technology is directly tied into these clandestine Climate Engineering programs. Monstrous storms, bizarre Ice floods in the desert and apocalyptic wild fires. Sudden ice fronts on the east coast, while massive droughts and heat waves plagued the west coast. The earth quakes in California – these events should compel us to ask questions that need to be answered; has nature gone erratic and are these events occurring through “climate change” solely caused by the release of carbon dioxide, or were these events caused deliberately through Geoengineering and HAARP? (6) If you are one of the “Red Pilled,” you know that promoting an Agenda in a Machiavellian fashion wouldn’t be far fetched. If you have any trouble believing this, you may want to start reading a de-classified official document of the US-Air Force, named “Weather As A Force Multiplier: Owning The Weather In 2025”(10)

Our bodies are now highly conductive, filled with the fine dust of Aluminum Nanoparticles, all we need to “short-circuit” is to get subjected toward lethal Frequencies of Microwave Transmissions.  Introducing 5G. The mixture of the highly concentrated microwave radio frequency waves of 5G will light up our highly conductive human bodies like Dante’s Inferno. In 2011 the World Health Organization (WHO) classified radio frequency radiation as a possible 2B carcinogen. Yet, 5G technologies are a completely different animal; it’s a beast.

As computer technology evolves, faster processing speeds require more bandwidth. While our current frequency bandwidths are becoming saturated, 5G is tapping into the new bandwidth of the extremely high-frequency millimeter wave (MMW), between 30GHz and 300GHz.

It should be noted that the same frequencies implemented on 5G are also used in military microwave weaponry. These radio frequencies turned up, can be used to conduct behavioral experiments on how to manipulate the masses with electromagnetic pulses and test the effects on the highly conductive brain matters, resulting most likely in heart damage, organ failure and strokes.

In the final phase of this grand experiment, the concentrated microwave radio frequency waves can cause people to drop dead by the millions – just like the bees in California did.

Many of us are familiar with the term EMP. A massive Electro Magnetic Pulse, generated by a nuclear explosion in the upper atmosphere, would fry and render all electronic circuits inoperable. Entire power grids would go down and would send us back into the dark ages for decades to come.

Question; what do you think such a massive electronic pulse would do, to a highly conductive human body, saturated with Aluminum Nanoparticles? Let your imagination run free for a moment.

The mass depopulation program is well underway, with a multitude of soft-kill programs in progress. Fluoride in the drinking water. GMO and Glyphosate in the food supply. Pharmaceutical drug poisoning and vaccinations. Add the brain washing apparatus called Television, coupled with the main stream news propaganda and you’re “good to go.”

It does not take much imagination to envision what heavy metal Nanoparticles, combined with a lethal dosage of radio frequency transmissions will do to life on earth. It could provide the “final solution” the “Elites” have been working on for decades – killing what’s left of humanity.